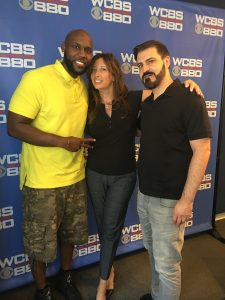 “The thing about hip-hop today is it's smart, it's insightful. The way they can communicate a complex message in a very short space is remarkable.” (Barack Obama)

Deidre and JG were joined in the GutwiZdom studios by two titans of hip hop today:

In this episode, we explore some of the misconceptions about hip hop and rap, and get the insider views on why it has the reputation that it does. Our conversation, however, quickly gets deeper into discussions about trusting your gut, overcoming obstacles and fears, and being successful.

ON WHAT HIP HOP IS…

DAVE: Hip hop is a culture – it’s not only a type of music. It has grown organically over time – it started as art (graffiti), dance (breakdancing), and then music through DJing and original music such as rap. Hip hop has had some negative influences, but I think that the record companies are responsible for some of the negative directions that rap has taken. If allowed to evolve on its own, it may have taken a very different direction.

MAHOGANY: It’s not a misunderstanding. It is what it is and it’s part of culture. Thinking back to Dr. Dre’s album Bad Intentions – the lyrics are everything that defines rap’s bad reputation. These lyrics are where Dr. Dre was at that time – it was truth for him.

DAVE: Hip hop was born in the Bronx, and grew up in the inner-cities across the country. Horrific conditions that are the result of hundreds of years of racism define these neighborhoods. There is naturally a lot of negativity in these communities and hip hop is the expression of that situation.

ON THE EXPLICIT NATURE OF RAP…

DAVE: There’s no question, it has gotten more explicit over time.

MAHOGANY: Two Live Crew is an example – not only explicit lyrics but the videos added nudity.

ON OVERCOMING OBSTACLES AND BEING POSITIVE…

MAHOGANY: My recent album’s objective was to be optimistic. I wanted to move forward. I grew up in the South Bronx, had two parents in my house (which was rare in my neighborhood). I had a chance to go to Honduras over summers and I saw true poverty and realized that I was in many ways lucky to grow up in the projects. I learned to be humble and grateful at a young age. I learned that obstacles are within me.  To paraphrase The Alchemist: the jewels are always in your own backyard.

DAVE: Following my heart and spirit is how I’ve been successful. You have to listen to everyone and learn from them, no matter who they are – someone living on the street or the president of a corporation. At the end of the day, though, you have to find what inspires you from within.

ON TRUSTING YOUR GUT INSTINCTS…

DAVE: You have to be committed and you have to be smart. There is something in you if you look for it. I’ve always followed my gut.

MAHOGANY: For me, instinct is everything when making music. 9/10 times when making a record, I get that feeling that the music is “right” - or if I don’t get it that feeling, I know it’s not there yet. A lot of people ignore that voice in their subconscious because they think maybe it’s just a random thought.

MAHOGANY: As a kid I played competitive basketball and every time you play you have to overcome fear and perform. Whoever you are, you have to have courage, from the receptionist to the CEO. Even if one CEO wants to speak with another CEO – he or she has to pull together the courage to do so.

DAVE: You have to learn to trust that inner voice and have the courage to stand behind what you believe in. Society imposes certain things on you – how to act what to say, etc. For me, I had the confidence not to feed into all of that and not do things the way society said to do them.

ON WIZDOMS THAT I WOULD GIVE MY YOUNGER SELF…

DAVE: I don’t like to second guess things that I’ve done. Everything happens for a reason, and the way you learn is through trial and error – making mistakes. I wouldn’t be the person I am today if I didn’t make those mistakes. When I have children, I’ll be able to give them advice based both on my experiences and on their own personalities.

OK, one thing maybe I would say: As a lifetime entrepreneur, I’ve learned that you can’t do everything on your own.

MAHOGANY: Open up more. Let people know more about yourself, and also ask questions about others and be genuinely interested in their answers. When I work with celebrities, I tend to think that I already know them – but they are just like anyone and there are things to learn. Dr. Dre once kept telling me about his home gym, and it didn’t occur to me for a while that what he was doing was inviting me to learn about him and to even join him in exercising. Lastly, I would tell my younger self to “grasp” more – learn more. There are opportunities to learn everywhere, it’s not all about music.

LISTENERS: KNOWING WHAT YOU KNOW TODAY, WHAT WISDOM WOULD YOU GIVE TO YOUR YOUNGER SELF? Send us your answer. Either leave us a voicemail at 1-646-653-9278 or send us an email. We may talk about it - or we may even talk with YOU - on the air!